Prior to its release, co-creator Annabel Jones disclosed the following information about the episode:

“This one’s like an indie movie set in blue-collar America, even though we filmed it in Canada. It follows a mother who has a young daughter and faces that perennial question of how to look after a child in an increasingly technical world; it taps into helicopter parenting… I always hope that whatever we tackle, it’s never on the nose and just more in the background but this episode asks how do you be a responsible mother in a world in which you can be all-powerful and omnipresent? How do you exercise responsibility? How do you ensure you give your child independence in a world in which you can have a lot of control? Charlie’s very technical — I’m a little bit technical — but none of these stories really ever have technology screaming down the lens. Arkangel is a very human story. It was a really harmonious production and watching [director] Jodie Foster with the young actors was just a joy to behold.”

Protective single mother Marie Sambrell (Rosemarie DeWitt) gives birth to her daughter Sara. Three years later, Sara goes missing one day at a playground, chasing after a cat. Marie becomes hysterical and calls out for Sara, but she is recovered shortly without incident. Fearing future crises, Marie signs up to participate in a limited-release free trial of Arkangel, a revolutionary tech-integrated child monitoring system.

An Arkangel representative administers Sara a neural implant, which enables Marie to monitor her geolocation and medical state in real time via an included tablet computer. The representative also demonstrates an option to view Sara's immediate eyesight, record and replay everything she has seen, and censor obscenity and other stressful stimuli with pixelation and audio distortion.

The Arkangel system proves initially successful, censoring an intimidating neighborhood dog; however, flaws in the system present themselves, such as the obscenity filter preventing Sara from reacting appropriately to her live-in grandfather's stroke (the program censors him, and Sara cannot hear him telling her to get the phone and call for help.)

Years later, after her grandfather's death, Sara (Sarah Abbott) has become socially outcast and emotionally immature due to lack of exposure to stressful stimuli and the fact everything she sees and hears can be monitored. She grows frustrated at being unable to view the contents of a shock site, to have its contents explained to her, or to even illustrate blood on paper.

That evening, she pricks her finger with a pencil in an attempt to produce blood, and, when it too gets blurred out, she begins stabbing her hand repeatedly. Marie gets a high stress warning from the tablet and sees what Sara is doing. She runs up to stop Sara from hurting herself, but she slaps her mother when Marie attempts to stop her.

Marie has her assessed by a child psychologist who concludes that Arkangel is responsible, revealing the controversy stemming from the ethical concerns surrounding it stopped it from being released and it is soon to be banned altogether.

Though the implant itself cannot be removed, he advises Marie to deactivate the obscenity filter and throw the tablet away. Marie deactivates the filter and Sara goes to school unsupervised for the first time, however Marie cannot bring herself to throw the tablet away and instead stores it away in the attic. At school, Sara's schoolmate Trick (Nicky Torchia) exposes her to gore, internet pornography and terrorist beheadings.

At age fifteen, Sara (Brenna Harding), now well-adjusted and popular, secretly attends a party with Trick (Owen Teague) at a nearby lake, telling Marie that she is going to a friend's house. Marie grows concerned after Sara fails to answer phone calls, and she finds out she lied about where she was going.

Quickly beginning to panic, Marie reactivates the Arkangel tablet in only to be horrified to witness Sara and Trick having sex. No longer trusting her daughter, Marie keeps the tablet on hand. When it flashes alerting Marie that narcotics are entering Sara's system, Marie watches and sees her daughter snorting cocaine with Trick much to her anguish.

Identifying Trick with a reverse image search, Marie uses the footage to intimidate and blackmail him into breaking up with Sara and cutting her off with no explanation, threatening to report him to the police for having sex with a minor. Sara is heartbroken when Trick suddenly stops talking to her, and he is unable to offer any kind of explanation.

Sara confronts Marie who insists that she was only doing it to protect Sara. In a blind fury, Sara pries the tablet from Marie's hands, accidentally reactivating the obscenity filter, and starts savagely beating Marie with it as the filter prevents her from seeing the damage she's inflicting.

The tablet breaks as a result of the attack, deactivating the filter and allowing Sara to see what she has done. Sara then grabs the things she put down on the ground and runs away.

A dazed Marie reawakens and frantically calls Sara's name down the street, mirroring her reaction to Sara's disappearance twelve years earlier. Meanwhile, having fled the scene, Sara flags down a semi truck for a ride. Marie screams her daughter's name as Sara leaves, intending to never return. 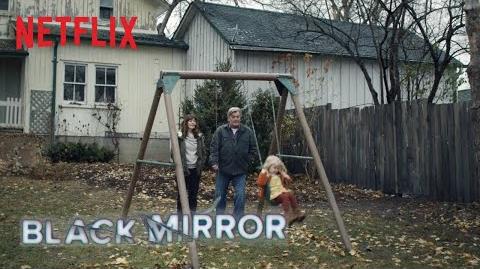