Whilst waiting for her car to charge in a remote charging station, Nish (Letitia Wright) comes across the neighbouring Black Museum, which houses "authentic criminological artefacts". She meets the proprietor, Rolo Haynes (Douglas Hodge), and explains she is out this way as her father lives nearby and her mother suggested she stop by to surprise him. Haynes offers to give her a tour, in which he recounts the stories of the artefacts he has collected, shown in flashback during the episode.

The first thing they come across is a device that looks like an electronic hairnet. In his past, Haynes was a neurological research recruiter for St. Juniper's, a scientific hospital which offered its patients free health care in return for being allow to test experimental treatments on them. Haynes approached Dr. Peter Dawson (Daniel Lapaine) in regards to testing an experimental neurological implant that would allow him to feel the physical sensations of others. Dawson used this device (which is now housed in the museum) to feel the pain of his patients, which allowed him to become an expert at diagnosing and treating them. Meanwhile, Dawson also used the interface to enhance sex with his girlfriend by feeling her orgasms as well as his own. Everything was going great for Dawson until one night a senator who had been poisoned was brought into the hospital. No-one could diagnose what was wrong with him, and Dawson was connected to the senator when he suddenly died. Dawson blacked out for a few minutes, but when he came around he seemed all right at first. However, he soon found that a side effect was that he now experienced pain as pleasure. When his girlfriend got tired of his demands for rough sex, he started hanging around the hospital waiting for patients. When a woman was brought in who suffered a heart attack, he connected himself to her and used her suffering for personal sexual arousal, to the point that he tried to attack the doctors attempting to revive her. Haynes was unable to reverse the procedure, so Dawson was removed from the hospital. One night, he found that his own pain caused him pleasure and, now addicted to the sensation, began mutilating himself. Realising that he could not inflict fear (and thus, further pleasure) on himself, Dawson tasered, tortured, and killed a homeless man with a drill. By the time the police found him, the extreme sensations of pleasure had caused Dawson to fall into a coma, with a look of pure bliss on his face.

In the present, Nish offers Haynes water since the museum's air conditioning is broken and they are both sweating profusely, and Haynes tells another story about a plush toy monkey. Jack (Aldis Hodge) and Carrie (Alexandra Roach) were a happy couple with a new baby when Carrie was hit by a truck and fell into a coma. Aldis visited his wife regularly, and even communicated with her using neuro technology (albeit, very basic technology limited to 'Yes' and 'No' responses). Haynes approached Aldis one day and suggested a new procedure to him; transfer Carrie's consciousness into his brain to allow her to see and hear everything he does while also allowing him to talk to her again. Aldis was uncertain when told they'd need to kill Carrie's body to perform the procedure, but Carrie agreed. The operation was a success and Carrie initially enjoyed sharing the sensations that Jack felt in the real world, particularly hugs with their now-toddler son Parker. However, shared consciousness began to take a toll on the couple, as Jack lacked privacy and Carrie had no agency in the real world. They went back to Haynes, who allowed Jack to put Carrie on "pause", infuriating her whenever he allowed her consciousness again. The two agreed on a system where Carrie would taken off pause at weekends, and this worked until Jack met Emily (Yasha Jackson), and the two began dating. Emily pressured Jack to have Haynes transfer Carrie's consciousness out of him completely, and Aldis agreed when Haynes suggested he move Carrie into a stuffed monkey, which was then given to Parker. The toy could only speak two phrases, "Monkey loves you" and "Monkey needs a hug". Carrie was furious, but Emily threatened her with deletion if she did not behave. Eventually, Parker grew tired of the toy and abandoned it, with Carrie trapped inside. In the present, Haynes tells Nish that the transfer of Carrie into the stuffed monkey was declared inhumane and led to his firing. Haynes then reveals that Carrie is still inside the stuffed monkey in the exhibit, since it is also illegal to delete her.

Haynes and Nish move on to the main attraction of the museum: a dismal hologram projection of Clayton Leigh (Babs Olusanmokun), a convicted murderer, the details of whose crime were briefly shown in the previous segments on TVs. After losing his job, Haynes began setting up the Black Museum intending the main draw to be celebrity consciousnesses the public could interact with. When this idea fell flat, Haynes modified his idea to instead transfer the consciousness of people on death row. Visiting Leigh, Haynes coaxed him to sign over the rights to his post-death consciousness in exchange for money to help support his family, despite the objections of his wife, who feared for his safety. After his execution, Clayton found himself reborn as a hologram inside Haynes' museum. Haynes set Leigh up in an execution display, in which visitors could pull a lever to make Clayton experience the agony of the electric chair (based on the technology that had driven Dawson insane) and feel like they were electrocuting him all over again. They could then leave with a key chain souvenir containing a preserved, and fully independent, copy of Clayton eternally in agony. Each electrocution is set to last 10 seconds, as 15 seconds or more would disrupt the hologram and erase it. This turned the museum into a huge draw, and in its early days the place was usually packed full of people happy to peruse the exhibits with almost everyone indulging in executing of Clayton over and over again.

In the present, Haynes begins to asphyxiate. Nish reveals herself to be Clayton's daughter: she sabotaged the museum's AC so that Haynes would become thirsty and accept her poisoned water. She asserts that her father was actually innocent, but the state never overturned the conviction. Protesters argued against the torments Haynes was subjecting Leigh's hologram to, which hurt the popularity of the museum, but not enough to shut it down. The exhibit now attracted wealthy sadists and racists to torture Clayton to the limit of his virtual consciousness, turning him into an empty shell. This caused Nish's mother to take "a bottle of pills and a bottle of vodka". Haynes dies, and Nish transfers his consciousness into Clayton's hologram. She pushes the electric chair simulation to its maximum, allowing Haynes to experience the full force of the torture and finally putting Clayton's consciousness to rest. Taking along with her the stuffed monkey and a "souvenir" of Haynes in eternal agony (thereby preserving a copy of his consciousness), and before returning to the car, Nish removes the device disabling the AC, which causes a short. Nish converses with her mother, who is revealed to share her consciousness with Nish, as Carrie did with Jack. Nish drives away, her mother shedding joyful tears as the museum is engulfed in flames.

Co-creator Annabel Jones disclosed the following information about the episode: "Black Museum is absolute popcorn. It’s three stories in one – a portmanteau-type thing – but absolutely full of ideas that whip along and before you know it you’re at the end of a 90-minute film and you’re like, ‘Oh my God, can you please stop? This is horrendous – stop throwing me these things!” It’s just unrelenting. It was the last we did in terms of shooting." 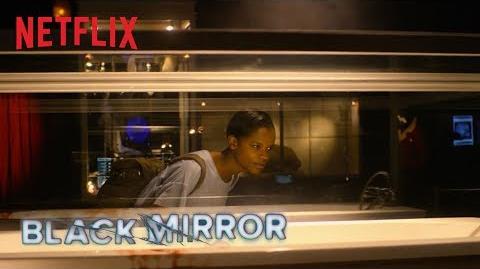