Edit
watch 00:45
'Black Mirror' - "Hang the DJ" Official Trailer
Do you like this video?
Play Sound

"Hang the DJ" is the fourth episode of Black Mirror's fourth season. It stars Georgina Campbell, Joe Cole, and George Blagden. The title is a reference to the song 'Panic', by The Smiths.

Frank (Joe Cole) is instructed by "Coach", an artificial intelligence system installed on a small, circular tablet, to go to "the Hub", a large, mall-like building. There he enters a restaurant where he is joined by Amy (Georgina Campbell), who is also following Coach's instructions. The two discover that it is the first time each of them has met someone through "the System", which dictates which romantic relationships its users will have and for how long. Amy and Frank check their tablets and find that their encounter will last only 12 hours.

Amy and Frank are taken to a numbered house, passing an encircling wall on the way. They talk, then sleep next to each other, parting the next morning after their relationship counter counts down to zero. In their separate conversations with Coach, it is revealed that the System enters users into numerous relationships and collects data on them in order to match the user with their "ultimate compatible other" on the user's "pairing day", which it claims has a 99.8% success rate.

As Amy and Frank's relationship continues, Frank becomes distracted by the fact that their relationship has a set end date. He breaks his promise to Amy and checks his tablet to see how long they have left. It initially says five years, but then "recalibrates" to ever-shorter lengths. Coach informs Frank that his "one-sided observation" of the expiration date has shortened his and Amy's relationship which eventually settles on 20 hours. The next day, Amy confronts Frank about his distracted behavior. Frank admits that he checked their expiry date and tells Amy they only have an hour left. The two argue, with Frank suggesting that they climb the encircling wall and escape the System. Amy leaves Frank, angry at him for breaking their promise and "breaking" their relationship.

After another string of indistinguishable short relationships, Coach informs Amy that her ultimate match has been found, and that her pairing day will be the following day. Coach tells Amy that her ultimate match is someone Amy has never met before, and gives Amy the chance to say farewell to one person of her choosing. Amy immediately chooses Frank, then tosses her tablet into a pool.

Amy and Frank meet at the restaurant in the Hub and discover their farewell period is just 90 seconds. Amy realizes that neither she nor Frank remember what their lives were like before they entered the System. She tells Frank that they must be undergoing a test and that rebelling against the System is part of passing it; they agree to rebel by climbing the encircling wall. As they start to leave the restaurant, a guard tries to stop them with a stun gun. Amy defies the guard by putting her hand on the stun gun, which freezes him and everyone else.

The two make it to the wall. As they climb it, the lights below them go out and pixelated blackness engulfs everything, revealing that they were part of a simulation. They reappear on a virtual plaza with the number 998 above their heads, surrounded by hundreds of other similarly numbered duplicates of themselves. They look up and fade out of existence, as a digital counter announces that 998 rebellions have occurred out of 1000 simulations.

The camera then flips into the real world and it is revealed that the System and its simulations are all part of an online dating app's matchmaking algorithm which reveals that the 998 rebellious simulations to actually be a 99.8% match for Amy and Frank. Amy and Frank lock eyes with each other and smile as the lyrics "Hang the DJ" from the song "Panic" by The Smiths plays in the background, and Amy begins to approach Frank.

Co-creator Annabel Jones disclosed the following information about the episode: "Hang The DJ doesn’t look contemporary but some of the observations and scenes that it tackles are… pertinent to the contemporary dating scene. It involves a lot of comedic moments. There’s quite a lot of sex in it – not a huge amount, but come on, who’s complaining? It’s funny, it feels real, and has that ‘Nosedive’ feel – a very alternative reality visual to it. You don’t know where you are or what world it is, but very quickly that becomes background – you’re just there with the characters, you’re seeing what they’re experiencing. I think there is a lot of comedic wry observations in the protagonist’s story that people will enjoy. It’s beautifully acted by Georgina Campbell and Joe Cole. People will enjoy this one with a little smile." 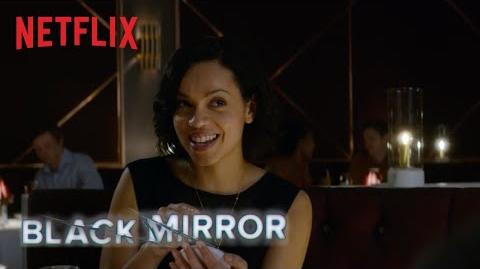