Co-creator Annabel Jones disclosed the following information about the episode: "This film is in black and white which is a new thing for Black Mirror but it feels the creative decision was earned by the world we’re portraying."

In a desolate landscape, Bella (Maxine Peake), Anthony (Clint Dyer), and Clarke (Jake Davies) drive to a warehouse to find something to help ease the pain of Jack, who is dying. While Clarke hijacks a van, Bella and Anthony break into the warehouse. They find the box they are looking for, but behind it is a four-legged robotic guard—a "dog". The dog releases a shell that showers Bella and Anthony with shrapnel that contains trackers. The dog climbs down and shoots Anthony twice, killing him. Bella flees without the box. She escapes to her car, with Clarke following in the van. The dog jumps onto the van, kills Clarke and begins to drive. Bella diverts her car through a forest, halting abruptly as she reaches a cliff edge. The dog tracks her and climbs into the car, but Bella jumps out and the car falls off the cliff.

Bella uses pliers to extract the tracker embedded in her leg, which she places into a plastic bottle and throws into a river. She uses her walkie-talkie; unable to hear the person on the other end, she gives them a message to pass onto her loved ones Ali and Graham in case she is killed. Bella runs into a forest, climbing a nearby tree. The dog's arm was damaged when it escaped from the car's wreckage, so it cannot climb the tree, and instead powers down and waits. Bella drains it of power by repeatedly throwing sweets at it, causing it to power up and power down. When the dog no longer responds, Bella climbs down. She comes across a compound and uses a long wire to grab a key ring through the letterbox.

Bella finds two rotting corpses in the upstairs bedroom, taking car keys and a shotgun from them. Now the sun has risen, the dog has recharged and gains access to the compound by inserting its leg into a slot. As the dog approaches, Bella leaps out and throws paint over its visual sensor, then throws the paint can to the corner of the room. Hearing it clatter, the dog rushes over and attacks while Bella runs. She starts the car, but the engine doesn't work. The radio plays "Golden Brown" by The Stranglers. The dog follows the noise and climbs inside the car. Bella shoots the dog and it stabs her in the leg; she shoots it again and it falls to the ground. The dog releases another shell, showering Bella with shrapnel.

In the bathroom mirror, Bella sees shrapnel-embedded trackers in her face. She lifts a knife, but notices a tracker in her jugular. Bella speaks into her walkie-talkie, unaware if she can be heard, saying goodbye to her loved ones. As she puts the knife to her throat, the camera pans out over the landscape where dogs are seen approaching and investigating. In the warehouse, the box's contents—dozens of teddy bears—have spilled onto the floor. 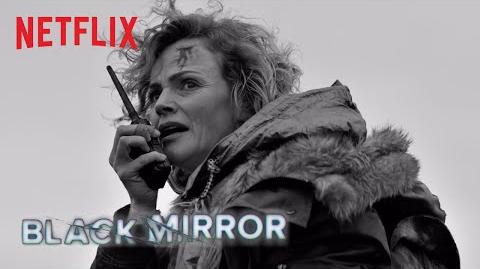