Start a Wiki
watch 00:37
'Black Mirror' - "USS Callister" Official Trailer
Do you like this video?

Captain Robert Daly (Jesse Plemons) and his crew are aboard a spaceship, the USS Callister, trying to defeat their arch enemy Valdack (Billy Magnussen). They destroy Valdack's ship, but he escapes. The crew celebrates, Daly kissing both female crewmates.

The real-life version of Daly is Chief Technical Officer at Callister Inc. The company was co-founded by Daly and James Walton (Jimmi Simpson), the company's Chief Executive Officer, which produces the multiplayer game Infinity, in which users control a starship in a simulated reality. Daly is treated poorly by his fellow employees, who appear identical to Captain Daly's crewmates. New programmer Nanette Cole (Cristin Milioti) praises Daly's work on Infinity, but the more assertive Walton interrupts to take her on a tour. When Daly returns home, he opens a development build of Infinity which is modded to resemble his favourite television show Space Fleet. As Captain Daly, he berates the crewmates, strangling a subservient Walton.

After employee Shania Lowry (Michaela Coel) warns Cole to beware of Daly, he takes a disposed coffee cup of Cole's and uses her DNA to replicate her consciousness within his development build. Cole awakens aboard the USS Callister, confused and distraught. Lowry explains that they are digital clones of Callister Inc. staff members. Cole attempts to escape the ship but is teleported back. She refuses to cooperate with Daly's commands, so he removes her facial features and suffocates her until she relents.

The crew embark on a mission in which they apprehend Valdack but spare his life. After Daly leaves, Cole finds a way to send a game invite containing a message for help to the real-world Cole. The real-life Cole asks the real-life Daly about the message, and he dismisses it as spam. Daly enters the game to interrogate his crew, and transforms Lowry into a monster when she defends Cole. Once he departs, Cole identifies a distant wormhole as an uplink to Infinity's next update; she surmises that by flying into the wormhole, the firewall will delete them and they will die. Walton is very hesitant to help; he explains that Daly once recreated his son Tommy within the game, and threw the boy out of an airlock to punish Walton. Cole promises they will destroy the lollipop containing Tommy's DNA.

When Daly next arrives, Cole convinces him to take her on a mission to Skillane IV alone. She strips to her underwear and runs into nearby water; Daly reluctantly follows her in, leaving behind the omnicorder which allows him to control the game. The crew teleport the omnicorder onto their ship, and use it to access sexual images of Cole on her PhotoCloud account. They use those photos to blackmail the real-life Cole into ordering a pizza to Daly's apartment, and stealing the DNA samples when he answers the door. They then teleport Cole onto the ship using the omnicorder. As Daly resumes play, he discovers the crew are escaping. He commandeers a crashed spaceship to pursue them through an asteroid belt. The Callister collides with an asteroid; Walton repairs the thrusters manually, incinerating himself, and the ship accelerates into the wormhole.

The crew reawakens in the un-modded version of Infinity with Lowry and Valdack. The firewall has detected Daly's modded build and locked his controls, rendering him physically unable to exit the game as it is destroyed around him. Meanwhile, the crew continues their adventure with Cole leading them, after interacting with an annoyed user "Gamer691" (Aaron Paul).

Co-creator Annabel Jones disclosed the following information about the episode: "USS Callister is a space opera. The challenges of trying to create that world, and obviously getting to play with the genre, opened a whole new opportunity. But I think we’ve put a clever spin on it. It’s a romp – it’s big and ambitious with lots of CG. It’s an absolute visual feast and really high octane. There are obviously more unsettling, poignant and slightly more melancholic moments, but at the same time, it is a romp. It’s such a treat for a filmmaker to be making a film this epic." 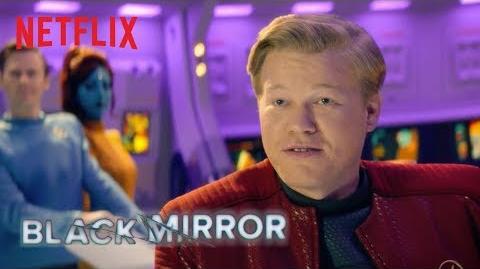